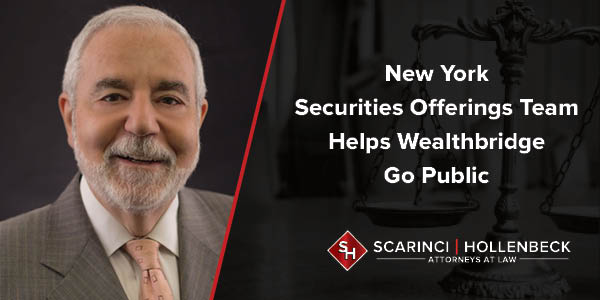 Lyndhurst, NJ, February 8, 2019 – Scarinci Hollenbeck’s Securities Offerings & Corporate Disclosure law group successfully provided legal support to Chardan Capital Markets and CIM Securities as lead underwriter in connection with Wealthbridge Acquisition Limited in its bid to raise $50 million in an initial public offering (IPO). According to the company, Wealthbridge priced 5 million units at $10 each, successfully raising $50 million. If the underwriters of the IPO exercise an option to buy an additional 750,000 units at the IPO price in the next 40 days, proceeds could rise to $57.5 million.

Wealthbridge is now one of several blank-check companies that have completed deals in early 2019 during an otherwise slow period for IPOs. As highlighted by Law360, “blank-check companies are shell entities that conduct IPOs to help fund acquisitions, usually targeting regions or industries that reflect the expertise of its management.” Using the proceeds from their IPO, Wealthbridge is currently looking to acquire a business in the air transportation industry in China, citing a recent surge in passenger levels that the company hopes to capitalize on.

Wealthbridge’s units will trade on the Nasdaq under symbol HHHHU. The company said each unit consists of one ordinary share, one warrant to purchase one-half of one share, plus one right to receive one-tenth of one share after the consummation of the company’s acquisition.

“This matter is significant because we were able to assist in bringing the deal to fruition to open the New Year at a time with questions swirling around the government shutdown,” stated William R. Samuels.

Wealthbridge Acquisition Limited is a blank check company formed for the purpose of acquiring, engaging in a share exchange, share reconstruction and amalgamation with, purchasing all or substantially all of the assets of, entering into contractual arrangements with, or engaging in any other similar business combination with one or more businesses or entities. The Company’s efforts to identify a prospective target business will not be limited to a particular industry or geographic region, although the Company intends to focus on operating businesses in the air transportation and aviation industry in China. You can learn more about Wealthbridge's IPO here.