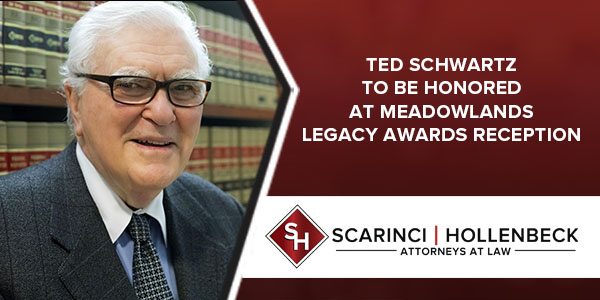 Lyndhurst, NJ – October 10, 2018 – Scarinci Hollenbeck is pleased to announce that Partner Theodore A. Schwartz has been selected by the Meadowlands Chamber as an honoree at the organization’s 45th Annual Legacy Awards reception. The Chamber is paying tribute to Mr. Schwartz and four other “distinguished and deserving” honorees for “their contributions to the Meadowlands business community.”

“This is an exciting recognition of the hard work I have dedicated to the Meadowlands region over the years. It has been a pleasure to help revitalize various industrial sites and transform them into functioning, productive sites, which has created a number of economic opportunities in the region. I am proud of how far the Meadowlands has come and I am honored to have played a role in its evolution,“ stated Mr. Schwartz.

The career of Theodore A. Schwartz spans over 50 years. During this time, Mr. Schwartz established himself as a pioneer in the field of Environmental Law with various achievements to his name. From 1965 to 1970, he was Deputy Attorney General for the State of New Jersey, where he acted as Chief of the Attorney General’s Task Force on Pollution. During this time, he authored numerous environmental laws and regulations, including the New Jersey Pollution Control Act, for example, which became a national model for environmental regulation.

Earlier on in his career, Mr. Schwartz spearheaded the creation of the New Jersey Department of Environmental Protection (NJDEP) as well as the New York State Department of Environmental Conservation (NYSDEC). Throughout his career, Mr. Schwartz has handled numerous landmark cases in the areas of air pollution, site remediation, water pollution, water supply and solid waste. Most notably among these cases was when Mr. Schwartz successfully brought an action against all major airlines using Newark airport to replace their jet engines with smokeless jet engines. This action sparked a national response and as a result, other states began to follow suit in prompting airlines to replace their jet engines.

In recognition of his credentials in environmental law, President Carter appointed Mr. Schwartz as a Commissioner to the National Alcohol Fuels Commission, where he analyzed the development of alternative fuel sources, which are now mandated in our fuel supplies. Additionally, Mr. Schwartz has continually been selected as a Pre-eminent Lawyer by Martindale-Hubbell, the leading publication for the rating of attorneys.

While most of his practice has involved environmental law regulatory matters, Mr. Schwartz has also devoted his efforts to various Brownfield redevelopment projects in New Jersey, specifically in the Meadowlands region and environs. Examples of these projects include the Xanadu development in which Mr. Schwartz played an integral role in the regulatory aspects. Another project Mr. Schwartz is involved in is the Koppers Coke Peninsula redevelopment project in Kearny, which is presently the largest project being developed in the region. As part of his Brownfield redevelopment activities, Mr. Schwartz has been active in the Port Newark/Elizabeth area environs, wherein he has managed all regulatory affairs of many port-related warehouse facilities.

You can learn more about the career of Theodore A. Schwartz by heading over to his Scarinci Hollenbeck attorney bio.

Mr. Schwartz and his fellow honorees will be celebrated this Thursday, October 11th, at The Venetian in Garfield, NJ. You can find more information on the event and register at http://local.meadowlands.org/events/Legacy-Awards-Reception-3919/details