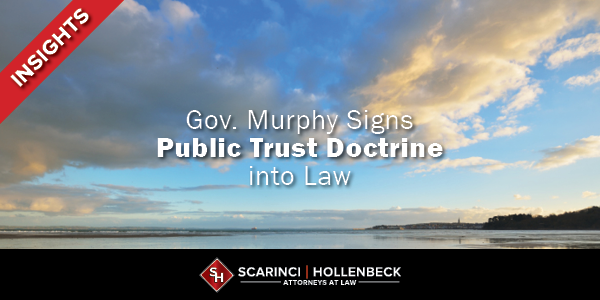 “New Jersey’s shoreline and coastal communities are some of our state’s greatest treasures,” Gov. Murphy said in a press release. “By strengthening the public’s right to access our beaches, we are ensuring that all New Jersey residents and visitors can enjoy our beautiful shore this summer and for generations to come.”

Under the public trust doctrine, the public rights to tidal waterways and their shores are held by the state in trust for the benefit of all people. The doctrine further provides that the public has the right to fully utilize these lands and waters for a variety of public activities.

Because the public trust doctrine was previously codified under case law rather than statute, New Jersey courts have decided how far the doctrine extends and who can enforce it. A 2015 Appellate Division decision invalidating the New Jersey Department of Environmental Protection’s (NJDEP) Public Access Rule was one reason the Legislature sought to intervene.

In Hackensack Riverkeeper, NY/NJ Baykeeper v. NJ DEP, 443 N.J. Super 293 (App. Div. 2015), the Appellate Division concluded that the NJDEP did not have the authority to adopt and enforce such rules. “Case law that has developed regarding the public trust doctrine, including those which have expanded its reach to privately owned property, do not support NJDEP’s contention that the legislature implicitly delegated regulatory powers to the agency,” Judge Carmen Messano wrote on behalf of the court.

Senate Bill 1074 confirms the public's right, under the public trust doctrine, to use and enjoy the State’s tidal waters and adjacent shorelines. To further this goal, the new law requires the NJDEP to ensure that any action taken by the agency pursuant to the Coastal Area Facility, Waterfront Development Act, the Wetlands Act of 1970, the Flood Hazard Area Control Act, and the federal Coastal Zone Management Act of 1972 is consistent with the public trust doctrine. It further mandates that the NJDEP ensure that any public funding issued, any action taken on a project using such public funding, and any project or any aspect of a project utilizing federal funding that is regulated or reviewed by the department is consistent with the public trust doctrine.

The new law provides an exemption for certain critical infrastructure, including power plants, oil refineries, tank farms, and other facilities. The Office of Homeland Security and Preparedness is tasked with establishing the rules governing which facilities are given the security designation.

The new law, however, includes an exception if the application for a marina property includes property on which there is a beach. In every case, the NJDEP must require that public access to the beach and the public’s use of the beach is provided as a condition of the permit or other approval and that activities that have the effect of discouraging or preventing the exercise of public access rights are prohibited.

The new public trust doctrine requirements apply to any application for an individual permit submitted on or after the effective date of the bill, which is 60 days following enactment.

To discuss how the new public access requirements may impact your development plans, we encourage you to contact a member of Scarinci Hollenbeck’s Environmental & Land Use Group.

If you have any questions or if you would like to discuss the matter further, please contact me, Dan McKillop, at 201-806-3364.