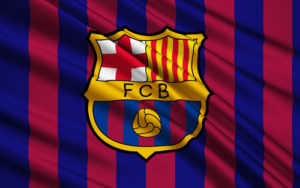 The most interesting grudge match in professional soccer this season isn't between FC Barcelona and Real Madrid, but rather the intellectual property lawyers representing Barcelona and footwear giant Adidas.

"Kit" sponsoring--sponsoring the uniforms of a team--is a highly competitive business dominated by Nike and Adidas. For example, Adidas pays top-rated Manchester United €83.5 million a season for the privilege of providing uniforms emblazoned with its three-stripe logo.

Never one to shy away from defending its brand, Adidas opened a new front in its rivalry with Nike the day after Nike signed a deal for a kit design and sponsorship with FC Barcelona at a record-breaking €155 million a season. Adidas took umbrage with the new kit design, which features seven stripes; four blue and three red, in an alternating sequence with smaller, vertical stripes within each of the larger ones. Note: FC Barcelona's jerseys have always featured some kind of stripe pattern since the inception of the club.

This clash of sportswear titans is currently unfolding at the United States Patent and Trademark Office (USPTO), Opposition No. 91230938. FC Barcelona's 2016 jersey design having already attained a trademark, Adidas filed a notice of opposition with the USPTO. It contends that its emblematic three-stripe mark precedes Barcelona's mark and therefore makes it invalid.

Indeed, Adidas has been using its three-stripe pattern in the United States and worldwide since 1952 for footwear and 1967 for apparel. Adidas claims it is trying to protect the goodwill it has worked to establish its brand since then, and if Barcelona's Nike-sponsored design were to stand, Adidas' goodwill would be diluted.

As mentioned earlier, Adidas is no stranger to the legal system when it comes to protecting its mark. Recently Adidas took action against fashion designer Marc Jacobs and clothing store Forever 21 for apparel that featured four stripes and three stripes, respectively, along the sleeves. That said, Adidas also has a history of working constructively with other designers, including its Yeezy line of sneakers made in conjunction with Kanye West.

This development is recent and the adjudication at the USPTO is ongoing. Stay tuned!