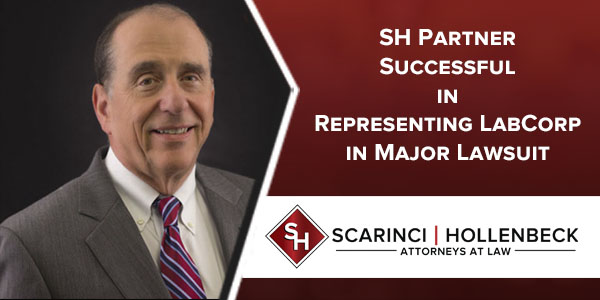 Red Bank, New Jersey, May 18, 2018 – Scarinci Hollenbeck recently secured victory for its client, LabCorp, in a lawsuit against Fusion Diagnostics Laboratories. The plaintiff, LabCorp, had performed medical tests for Fusion, a smaller laboratory that was unable to conduct those particular tests. The lawsuit arose from money owed to LabCorp for its services rendered to Fusion, which Fusion did not pay. Then, Fusion counterclaimed, making claims against LabCorp, including antitrust violations, violation of New Jersey’s Consumer Fraud Act, tortious interference with its clients and breaches of contract.

Fusion argued that LabCorp breached its contract by overcharging the laboratory and failing to deliver timely test results. As a result, Fusion claimed that it lost several customers and sought damages from LabCorp of over $400,000. Months before the trial, however, Partner and Co-chair of the firm’s Litigation practice group, Joel N. Kreizman, was successful in having all of Fusion’s claims dismissed through summary judgment order, except the breaches of contract claim.

LabCorp then went to trial in the middle of last month on its affirmative claim for money owed and Fusion’s breach of contracts claim. In a non-jury trial, Hon. Frank J. Deangeles struck down Fusion’s claims, dismissing them with prejudice. LabCorp was awarded the full amount of money it sought in addition to pre-judgment interest.

“I am very pleased with the result. It’s always a pleasure to appear before a Judge who pays attention, understands the evidence, rules in a very timely fashion and provides a sound basis for his ruling. That’s what the system is supposed to be about,” Mr. Kreizman stated.

Joel N. Kreizman concentrates his practice in Commercial Litigation. He is a former Deputy Attorney General assigned to the Antitrust Bureau of the Division of Criminal Justice and also a former chairman of the Antitrust Law Committee of the New Jersey Bar Association. He has lectured on Antitrust and Franchise topics before both the Institute for Continuing Legal Education and the New Jersey Bar Association. As a litigator, he frequently appears in Federal Court and in the Chancery Division of the State Courts. He is the former chairman of the Federal Practice Committee of the Monmouth Bar Association and was the Chairman of the Chancery Practice Committee of that Association from 2000-2010. He served as a Judge of the Ocean Township Municipal Court for eleven and a half years and was named to SuperLawyers for 2011-2018.