Scarinci Hollenbeck Counsel, Roshan D. Shah, Has Been Named Among Leaders in Law by NJBiz 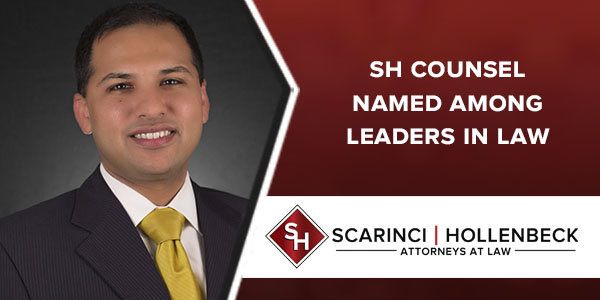 Scarinci Hollenbeck Counsel, Roshan D. Shah, Has Been Named Among Leaders in Law by NJBiz

Lyndhurst, NJ – June 26, 2018 – Scarinci Hollenbeck is proud to congratulate Roshan D. Shah, Counsel in the firm's Litigation practice, for having been recognized among the "Leaders in Law" by NJ Biz. In its second iteration of the Vanguard Series, the popular business journal sought to compile a list containing profiles of legal professionals who "stood out for their roles in important (sometimes landmark) cases." NJBiz polled dozens of law firms, looking for stand-out attorneys, irrespective of their position within their firms. According to Howard Burns, editor at NJBiz, these profiles are "not about the people at the top of the org chart, but rather those within their organizations who were selected for their exemplary work."

"It is an honor to have been recognized by NJBiz for inclusion in their Vanguard Series, especially given how many talented attorneys there are in New Jersey. Recognition like this would not be possible without the professionals I've had the privilege of working with at Scarinci Hollenbeck, as well as the clients who have entrusted me with their legal matters. I can't thank them enough for inspiring and challenging me at every turn," stated Mr. Shah.

Mr. Shah was named among the "Vanguard Series: Leaders in Law" honorees for his work in securing an interlocutory appeal on behalf of the firm's client, Maxwell Corporation of America. The appeal included not only a victory in the Appellate Division, but also a successful motion for leave to appeal in the New Jersey Supreme Court, which is a rarity in commercial cases. More detailed coverage on the matter can be found here.

You can check out NJBiz's full Vanguard Series: Leaders in Law here.

Roshan D. Shah is a distinguished litigator and trial attorney who has successfully tried cases to juries in federal and state courts. Mr. Shah has extensive experience in all facets of litigation in a variety of forums, including federal and state trial courts, the New Jersey Appellate Division and the Third Circuit Court of Appeals, and administrative agencies. Additionally, he has represented multinational corporations, federal defense contractors, health care providers and public sector clients. He was named New Leader of the Bar by the New Jersey Law Journal in 2016.