In a scene from Karate Kid II, a young person climbs a bell tower to sound the alarm and warn the village of a pending typhoon. 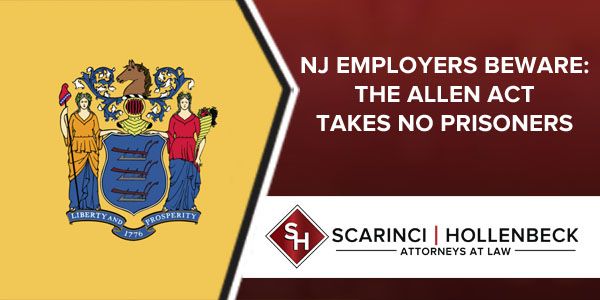 In a scene from Karate Kid II, a young person climbs a bell tower to sound the alarm and warn the village of a pending typhoon.

Today I am that young person, this blog post is that bell and—if you’re a New Jersey business without a well-thought out compensation scheme—the typhoon is the Diane P. Allen Equal Pay Act. Passed with overwhelming bipartisan support (74-2 in the Assembly and 35-0 in the Senate) and guaranteed to be signed by Governor Phil Murphy in the coming days, the Allen Act amends the New Jersey Law Against Discrimination (LAD), N.J.S.A. 10:5-12, et seq. and specifically targets pay disparity. Here’s what employers need to know about this law.

What Does The Allen Act Mean For Your Business?

The Allen Act makes it illegal for employers to pay a member of a protected class less than a member of a non-protected class when both are doing “substantially similar work, when viewed as a composite of skill, effort and responsibility.” In plain(-er) English: pay Sally the same as John when both are doing roughly the same work and have similar skills and duties. And no, you cannot comply with the law by simply lowering John’s salary to match Sally’s. The law expressly prohibits that: “[a]n employer who is paying a rate of compensation in violation of this subsection shall not reduce the rate of compensation of any employee in order to comply with this subsection.”

Employers who contract with public agencies should gear up for additional reporting. The Allen Act requires these employers to disclose to the Commissioner of Labor and Workforce Development “information regarding the compensation and hours worked by employees.” The information “must be categorized by gender, race, ethnicity, and job category.” The Commissioner is charged with promulgating the requisite reporting form. Employers should keep an eye out for this form and be prepared to challenge it if it seeks information that goes beyond what the Act authorizes.

Do You Have To Pay Everyone The Same Regardless Of Merit?

In a word: no. The Allen Act permits an employer to pay a different rate of compensation in three circumstances. The first two require the employer to demonstrate the pay differential is based on a seniority system or a merit system. The law doesn’t define “merit system.” Black’s Law Dictionary defines it as a “uniform and impersonal employment and advancement policy,” which is based on the “[e]valuation of abilities and achievements, and not politics or favoritism[.]” The hard truth is that most businesses—especially small and mid-size businesses—that claim to have a merit system will struggle to show the system is uniformly applied. When it comes to compensation, exceptions to the stated rules will undoubtedly exist even in the most disciplined organizations.

The third circumstance justifying a pay differential may be more trouble than it's worth (which is probably the point). The employer must demonstrate:

All five elements must be present to justify the pay differential. An example illustrates how tall of an order this is.

Imagine John and Sally are primary care physicians with similar education, training and experience. Both are assigned to work three days per week at a hospital, with John assigned to work on Mondays, Wednesdays and Fridays, while Sally is scheduled for Tuesdays, Thursdays and Saturdays. The hospital schedules the shifts and both John and Sally are available to work any day.

As it so happens, Saturdays tend to draw more patients on Medicaid, which reimburses the hospital at a lower rate than private health plans. When the first year ends, and the hospital tallies receipts, John comes out ahead. Now assume the hospital has a compensation scheme that sets the following year’s pay based on the current year’s receipts. On its face, this scheme is gender neutral. Does this violate the Allen Act? Most likely, yes.

If the hospital claimed that the difference in gross receipts was the basis for the pay disparity, that may arguably satisfy the first four elements. But what about the fifth element? Is there a “legitimate business necessity” for this scheme? More importantly, is there an “alternative business practice[]” that would still serve the employer’s goals and vitiate the economic impact on Sally? Of course there is: schedule John for more Saturday shifts and Sally for more Mondays (or Wednesdays or Fridays).

So no, you don’t have to pay everyone the same under the Allen Act without regard to merit. But do not underestimate the ability of a seasoned attorney to transform what appears to be a neutral compensation scheme into an Allen Act violation. Honest evaluation of compensation schemes is critical.

What Happens If Employers Violate The Allen Act?

When it comes to violators, the Allen Act takes no prisoners. Start with the Act’s statute of limitations. Each time an employee is paid at the discriminate rate, the LAD’s two-year statute of limitations resets. For example, the Act has an effective date of July 1, 2018. If an employee is unfairly paid on July 13, 2018, then that employee has two years from that date to file suit. But that’s not all.

After filing suit within the two-year period, the employee can reach back up to six years for back pay. The employee can also recover, like all LAD plaintiffs, for emotional distress damages—even if they never treated with any medical professional—as well as punitive damages. After the judge adds all of these numbers up, the court “must” multiply the award by three. In other words, if the jury awards $2 million, the judge must increase it to $6 million. Look for deep-pocketed employers to mount 7th Amendment (right to a jury trial) and Fourteenth Amendment (due process) challenges to this multiplier provision.

The pain isn’t over just yet. Once the damages are calculated, including the multiplier, the employer must pay the plaintiff’s attorneys’ fees.

What Employers Should Do

Starting right now, employers must proactively examine their compensation structures, audit disparities between similarly-situated employees doing similar work, and evaluate whether the disparities can be ameliorated through alternative business practices or are otherwise justified under the Allen Act. Keep in mind, the Allen Act will not permit employers to justify pay disparities based on negotiations. That is, it will no longer be a defense to argue that John is being paid more than Sally because John negotiated a higher salary when he started. Compensation may be based on how well the employee performs in his role for the employer, but no longer on how well the employee negotiates with his employer. Employers must confront, consider and, if necessary, change their compensation structures. Otherwise they risk being erased by the typhoon that is the Allen Act.

If you have questions about the Allen Act or auditing your payroll, please contact us

If you have any questions about the Allen Act please feel free to reach out to me, Roshan Shah, or call the Scarinci Hollenbeck attorney with whom you work at 201-806-3364.