What Is an Inclusionary Zone? 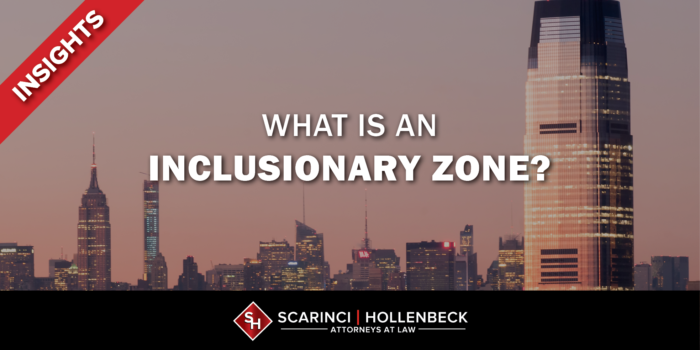 What Is an Inclusionary Zone?

In response to concerns that lower‐income residents are being priced out, Jersey City is the latest municipality to consider the adoption of an inclusionary zoning ordinance. If enacted, it would require developers to set aside a certain number of units for affordable housing.

Inclusionary zoning is an affordable housing tool that ties the creation of affordable housing to the creation of market-rate housing, with the goal of encouraging new residential developments to make a certain percentage of the housing units affordable to low or moderate-income residents. As described by the Furman Center for Real Estate and Urban Policy, many inclusionary zoning programs include measures to encourage development. For instance, some local governments provide cost offsets to developers, such as density bonuses that allow the developer to build more units than allowable under conventional zoning, or provide streamlined permitting that allows developers to build more quickly.

While inclusionary zoning dates back to 1972, it has become more prevalent in recent years as cities struggle to address affordable housing concerns. In New Jersey, Newark made headlines last year when it enacted an inclusionary zoning ordinance. It mandates that developers who are creating or rehabilitating housing projects of more than 30 units to set aside 20 percent of them as affordable.

As set forth in the ordinance, its purpose is to “create mixed-income housing through new construction to assist the City in promoting the creation of Inclusionary Developments and Affordable Housing as the City grows and attracts new market-rate residential development.” In support, the ordinance states that nearly 40% of Jersey City’s households are cost-burdened, defined by HUD as paying more than 30% of one’s income towards housing, combined with housing values increasing at a much faster rate than income creates difficulties for families paying for other necessities such as food, clothing, transportation and medical care.

The Jersey City inclusionary ordinance further states that “an inclusionary ordinance with incentives and requiring a mandatory set-aside of affordable housing on-site is an effective and fair means of encouraging and ensuring the production of affordable housing by private sector developers recognized by the New Jersey Supreme Court in So. Burlington Cty. N.A.A.C.P. v, Mt. Laurel Tp., 92 N.J. 158 (“Mt. Laurel II”) and the Fair Housing Act.”

Jersey City’s inclusionary ordinance requires developers to build new affordable homes as part of new residential projects. The mandatory affordable-housing set aside would apply to all properties/developments with a residential component that are requesting an additional 5 units or 5,000 square feet of additional residential floor area, whichever is less, beyond the permitted existing zoning through a variance pursuant to N.J.S.A. 40:55D-70.c., NJSA 40:55D-70.d or a Redevelopment Plan Amendment. The ordinance provides exemptions for developments of 30 units or less; any project which is to be undertaken by the Jersey City Housing Authority; and rezoning initiated by the City as a result of a Master Plan Update or Amendment.

Under the ordinance, applicable developments must set aside not less than 20% of the total number (permitted plus additional) of residential units as affordable housing. This requirement applies to both rental units and all forms of ownership. The 20% set aside must be provided on-site in accordance with the following:

The required affordable housing units must be constructed on-site and integrated with the market rate units unless granted relief by the approving authority. At the discretion of the approving authority, developers can also make a voluntary cash payment into the City of Jersey City's Affordable Housing Trust Fund in lieu of constructing all or part of the affordable housing units required by the ordinance.  A reduction in the mandatory on-site affordable housing requirement may also be considered relative to the value of community benefits proposed by the developer.

The members of the Scarinci Hollenbeck Land Use group often provide advice and guidance regarding development and redevelopment within the requirements of Jersey City’s ever-changing zoning regulations. We will continue to track the progress of the proposed ordinance and provide updates as they become available.

If you have any questions or if you would like to discuss the matter further, please contact me, Donald M. Pepe, or the Scarinci Hollenbeck attorney with whom you work, at 201-806-3364.

Donald M. Pepe devotes his practice to all aspects of complex real estate development and real estate transactional work with an emphasis on retail and residential development.Full Biography >>