Would the Court Blueline Your Non-Competition Agreement? 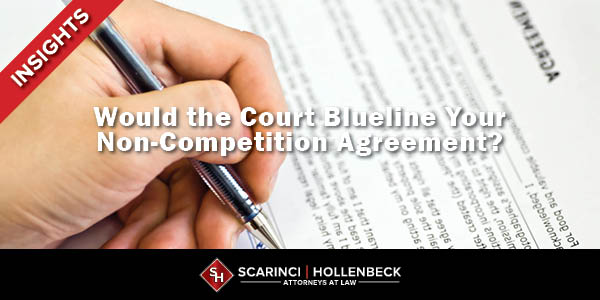 Would the Court Blueline Your Non-Competition Agreement?

The Third Circuit Court of Appeals recently upheld non-competition agreements that ADP, LLC (ADP) required certain employees to sign as a condition of receiving stock options. However, the appeals court remanded the cases back to the district court with instructions to “blueline” the overbroad restrictive covenants.

The RCA is more restrictive than the other agreements. It contains a strengthened non-solicitation provision (Non-Solicitation Provision), which prohibits employees—for a period of one year following their termination (voluntary or involuntary)— from soliciting any ADP clients to whom ADP “provides,” “has provided” or “reasonably expects” to provide business within the two-year period following the employee’s termination from ADP. Unlike the SRA, which only prohibits solicitation of those ADP clients with whom the former employees “w[ere] involved or exposed,” the RCA also prohibits solicitation of all current and prospective ADP clients. In addition, while the SRA limits former employees’ solicitation of ADP’s “marketing partners,” the RCA prevents former employees from soliciting ADP’s “Business Partners,” which is defined to include “referral partners” in addition to “marketing partners.”

The RCA also contains a non-compete provision that is absent from the SRA and NDA (Non-Compete Provision): For a period of one year following their termination, employees will not “participate in any manner with a Competing Business anywhere in the Territory where doing so will require [them] to [either] provide the same or substantially similar services to a Competing Business as those which [they] provided to ADP while employed,” or “use or disclose ADP’s Confidential Information or trade secrets.” The term “Territory” is defined as the “geographic area” where the employee worked or had contact with ADP clients in the two years prior to her termination.

Appellees Nicole Rafferty and Kristi Mork are both former employees of ADP who, shortly after voluntarily leaving ADP, began working at Ultimate Software Group (Ultimate), a direct competitor of ADP. Rafferty and Mork each signed the SRA and NDA at the outset of their employment, and each were eligible for and accepted restricted stock awards pursuant to the RCA over several consecutive years. After ADP learned that Rafferty and Mork joined Ultimate upon leaving, it filed a motion for preliminary injunction against each former employee in the District of New Jersey, seeking enforcement of the SRA, NDA, and RCA, and alleging breach of contract, breach of duty of loyalty, and unfair competition.

In each case, the District Court found the RCAs to be unenforceable. In reaching their decision, the courts relied on Solaris Industries, Inc. v. Malady, 264 A.2d 53 (N.J. 1970), in which the New Jersey Supreme Court held that while an employer that “extracts a deliberately unreasonable and oppressive noncompetitive covenant” should receive no benefit, courts should partially enforce an overbroad covenant as long as it is “[1] reasonably necessary to protect [an employer’s] legitimate interests, [2] will cause no undue hardship on the defendant, and [3] will not impair the public interest.”

The Third Circuit ruled that the RCA should be partially enforced. “We conclude that these restrictive covenants are not unenforceable in their entirety because they serve a legitimate business interest, but they may place an undue hardship on employees because they are overbroad,” the court wrote. “Accordingly, we will remand for the District Court to consider whether and to what extent it is necessary to curtail the restrictive covenants’ scope, which is the approach prescribed by the New Jersey Supreme Court when confronted with overbroad restrictive covenants such as these.”

In reaching its decision, the Third Circuit noted that “New Jersey courts have strived, if possible, to salvage restrictive covenants, construing [the Solaris] three-part test as rarely justifying the total invalidation of a restrictive covenant.” With respect to defining “legitimate business interests,” the Third Circuit highlighted that New Jersey courts have consistently found that employers have “patently legitimate” interests in their trade secrets, confidential business information, and customer relationships. When a restrictive covenant extends beyond an employer’s legitimate interests, courts applying New Jersey law have typically resorted to blue penciling to fulfill the contract’s lawful ends.

Applying the Solaris factors to the RCA, the Third Circuit first found that ADP was justified in imposing more onerous restrictions on its highest-performing employees. “[P]ost-termination competition from those employees or their solicitation of ADP’s clients and Business Partners would pose a greater threat to ADP’s business than would that of employees who failed to meet their sales goals and thus, necessarily, have less contact with ADP’s clients,” the panel explained. “ADP therefore has a legitimate business interest in imposing the RCA on this subset of employees, and the RCA’s heightened restrictive covenants, over and above those in the SRA and NDA, are reflective of the greater damage those employees could inflict on ADP upon their departure.”

With regard to undue hardship, the Third Circuit emphasized that, under New Jersey law, even if a restrictive covenant is found enforceable because it serves legitimate business interests, it may be limited in its application concerning its geographical area, its period of enforceability, and its scope of activity so that those interests are not outweighed by the hardship the covenant inflicts on the employee. Here, it determined that the undue hardship factor also weighed in favor of blue-penciling and “compels a remand for the District Court to determine in the first instance the extent of the employees’ hardship and the specific revisions that could be made to render the RCA reasonable under the circumstances.”

Lastly, the Third Circuit addressed the third factor. It concluded that because the case contains “no major public component,” the imposition of restrictive covenants here creates no injury to the public in the nature of “the rights of the public to have free access to the advice of professionals licensed by the State.”

“Here, the public interest points both ways—towards the employees’ ability to use their marketable skills and the employer’s interest in protecting its goodwill and client relationships—and is ultimately equivocal,” the court wrote. “Thus, we are confident that the approach outlined above balances the relative interests of ADP and Appellees in a way that comports with the public interest, including the clear preference under New Jersey law to modify overbroad restrictive covenants rather than nullify them outright.”

The Third Circuit’s decision is good news for New Jersey businesses in that it confirms that courts will rarely strike down a restrictive covenant agreement in its entirety. Businesses, however, should also understand that the failure to ensure that such provisions are narrowly tailored to protect legitimate business interest may result in blue penciling by the courts.

If you have any questions or if you would like to discuss the matter further, please contact me, Robert E. Levy, or the Scarinci Hollenbeck attorney with whom you work, at 201-806-3364.

Partner and Chair of the firm's Litigation Group, Robert Levy is a Certified Civil and Criminal Trial Attorney by the Supreme Court of New Jersey. His practice includes jury and non-jury trial preparation and trials with emphasis upon complex civil and criminal matters including Labor and Employment Defense, Commercial and Corporate Litigation, Criminal Litigation and Civil Rights Litigation.Full Biography >>