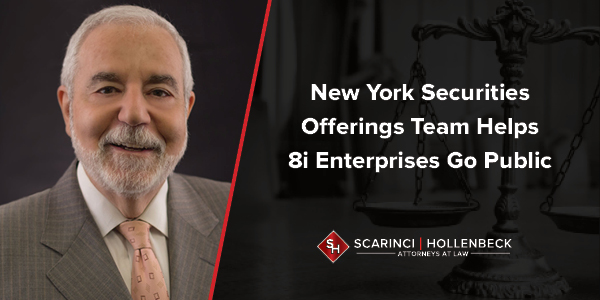 New York, NY, April 3, 2019 – Scarinci Hollenbeck’s Securities & Investment Banking law group successfully provided legal support to the underwriters of the offering of securities of 8i Enterprises Acquisition Corp. which raised $50 million in an initial public offering (IPO) this week, selling 5 million units at $10 each. If the underwriters of the IPO exercise in full their 45-day option to buy an additional 750,000 units at the IPO price, proceeds would rise to $57.5 million.

8i Enterprises’ units trade on Nasdaq under the symbol JFKKU. The company said each unit consists of one ordinary share, one warrant to purchase one-half of one share, plus one right to receive one-tenth of one share after the consummation of the company’s acquisition of a business entity.  Using the proceeds from its IPO, 8i Enterprises is currently looking to acquire a business or business entities located in Asia.

A registration statement relating to the securities being sold in this offering was declared effective by the Securities and Exchange Commission (“SEC”) on March 27, 2019. The offering was made only by means of a prospectus, copies of which may be obtained by contacting Chardan Capital Markets, LLC, 17 State Street, 21st floor, New York, New York 10004. Copies of the registration statement can be accessed through the SEC's website at www.sec.gov.

“This is the second IPO this year in which we have represented the underwriter and sole-book-running manager, Chardan.  The IPO market had been moribund for a number of years, but there has recently been a significant increase in the number of planned IPO’s of size filed with the SEC. This is seen as a good sign for the expansion of the U.S economy,” stated William R. Samuels.

About 8i Enterprises Acquisition Corp.

8i Enterprises Acquisition Corp. is a blank check company formed for the purpose of acquiring, engaging in a share exchange, share reconstruction and amalgamation with, purchasing all or substantially all of the assets of, entering into contractual arrangements with, or engaging in any other similar business combination with one or more businesses or entities. The Company’s efforts to identify a prospective target business will not be limited to a particular industry or geographic region, although the Company intends to focus on operating businesses in Asia. You can learn more about 8i Enterprises’ IPO here.

Author: Anthony R. Caruso
Mentioned Attorneys
Get the latest from our attorneys!