In a Recent Memorandum Opinion, the Tax Court Held That a Taxpayer Satisfied the Requirements for Remote Material Participation 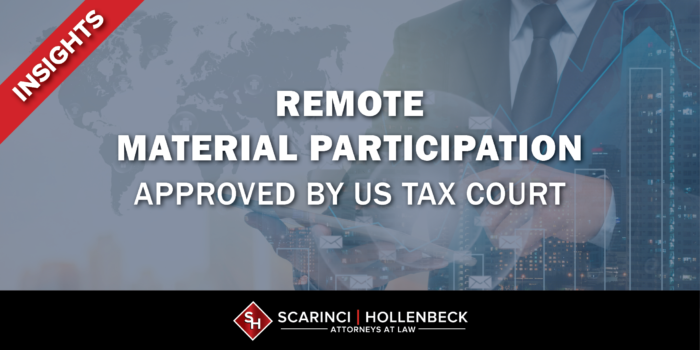 In a Recent Memorandum Opinion, the Tax Court Held That a Taxpayer Satisfied the Requirements for Remote Material Participation

In a recent Memorandum Opinion, the Tax Court held that a taxpayer satisfied the requirements for materially participating in his Chicago based business despite living in Florida approximately 60 percent of the year. Satisfying the test for material participation is important because it allows you to use your business losses to offset other sources of business income. Meanwhile, deductions and losses generated by a “passive activity” are limited to income from passive activities.

The Tax Court’s ruling in Barbara v. Commissioner, TC Memo 2019-50, is good news for business owners because it confirms that working remotely will not be treated any differently than working in a physical office with respect to calculating the time spent towards an activity for purposes of material participation. Accordingly, you may live in one state and operate a business in another while still satisfying the material participation requirements.

Red state, blue state, high tax state, low tax state; with the passage of the TCJA, these issues have become more significant.  The income tax rates for several states are as follow:

New York City (in addition to the New York

On the other hand, seven states do not have income taxes.  They are:

If you were to select a place to live and your focus was the least amount of state and local income taxes, the choices are obvious.  The issue is, however, if you are conducting business in a high tax state, can you have your domicile in a low tax state. Perhaps under the right circumstances, you may utilize Puerto Rico’s incentive provisions. Act 20 and Act 22, to substantially reduce your combined federal and state income tax burden.  These acts were designed to bring service businesses and wealthy individuals to Puerto Rico.  Act 20 and Act 22 are attractive to service providers who do not need to be physically present in one of the fifty states.

Aside from the obvious geographical challenges and perhaps time zones, there is also an IRS tax section that might prevent you from utilizing a loss in a tax year to offset gains in current or subsequent years.  Normally if a taxpayer, who is in a trade or business and suffers a net operating loss, under the TCJA 80% of the loss can be carried forward to offset income in a future year.  The key element is the loss occurs in a trade or business in which the taxpayer is active.  Being an active participant allows losses in the activity to offset other current ordinary income or future income.  See Section 162(a) and Section 212(1).

Tests Based on Current Participation

Tests Based on Prior Participation

Tests Based on Facts and Circumstances

The IRS regulations contained substantial detail on how to meet one of the seven tests.  Mr. Fred Barbara managed to be a Florida domiciliary and operated a business in Chicago and yet satisfied the material participation test of the passive activity rules.

The Barbaras reside in Florida when they filed their petition.  Presumably, they were domiciled in Florida.

In 1997, Mr. Barbara sold Barbara Trucking for tens of millions of dollars.

Mr. Barbara used the proceeds from the sale of Barbara Trucking to start a money lending business.  This business capitalized on the network of contacts in the Chicago construction industry that he had developed while running Barbara Trucking.

In conducting the lending business, he usually lent the money in his personal capacity.  But on a few occasions, he lent the money through a family trust or a closely held limited liability company, Barbara Capital II, LLC.  This LLC is treated as a partnership for federal tax purposes.

The office of the lending business was in Chicago. The office was staffed by two full-time employees: an accountant and a secretary.

When in Florida, Mr. Barbara lived in a house that he had purchased in 1995. He called the Chicago office every day when it opened at 9:00 a.m. He also communicated with the office at other times, through telephone, fax, and e-mail. He averaged at least two hours of work per day on the lending business while in Florida. This means that he worked at least 240 hours per year on the lending business while he lived in Florida, computed as follows:

The court agreed that the activity at issue is all of Mr. Barbara’s lending, whether loans were made individually or through an entity, was active and that he materially participated in the lending business.

Both while he was in Chicago and in Florida, Mr. Barbara’s participation in the lending business was regular, continuous and substantial.  Accordingly, losses were deductible under IRS Section 162. Moreover, the losses suffered in the prior year could be used to offset income in another year.

The case is significant for two reasons:  First, the material participation test has no geographic limitations; second, the material participation test rest on quantitative i.e. number of hours spent, and qualitative, i.e. the significance of the individuals’ participation, good record keeping is essential.  What kind of record keeping would be needed?  A journal or daily diary detailing the nature of the activity, i.e. telephone calls, examination of records, agreements, etc. and the maintenance of regular business financial records as well as time spent on each activity and so forth.

Meeting the material participation requirements among other requirements might allow a taxpayer to live in a low tax state and yet manage a business in a high tax state. Consider an additional possibility, one that may allow one to avoid these rules.

Puerto Rico enacted a corporate incentive scheme Act 20, that provides a 4% corporate tax on income and zero percent on dividends and capital gains.  A software company could easily avail itself of this opportunity.  There are requirements, such as the hiring of local employees and a business presence, which require more than a nameplate on a wall in a foreign jurisdiction.  Individuals, under Act 22, who are present in Puerto Rico for six months in the prior year, receive government approval and draw a reasonable salary form the relocated business may benefit from this regime.  There is a 100% exemption from Puerto Rican taxes on dividends, interest and capital gains accrued after residency. Act 20 and Act 22 offer an alternative to expatriation and may prove valuable in the right situation.

While there are obvious geographical and other challenges, the Tax Court has provided a path for the operation of a remote business from a tax-friendly jurisdiction.

If you have any questions or if you would like to discuss the matter further, please contact me, Frank Brunetti, or the Scarinci Hollenbeck attorney with whom you work, at 201-806-3364.