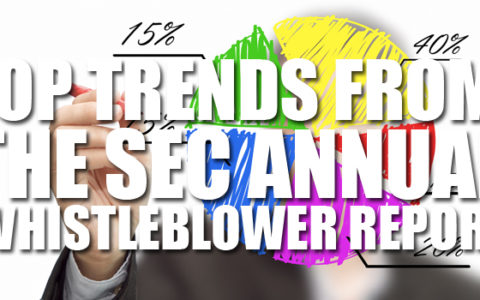 The Securities and Exchange Commission (SEC) recently issued its 2015 Annual Report to Congress on the Dodd-Frank Whistleblower Program. The SEC’s latest whistleblower report highlights that the agency’s Office of the Whistleblower continues to strengthen what is termed a “successful program.”

Per our prior posts, the SEC’s Whistleblower Program, which was first launched in 2011, provides a monetary incentive to corporate insiders and others with relevant information concerning potential securities violations to report such information to the Commission. Those who provide high-quality, original information, resulting in SEC enforcement action with sanctions exceeding $1 million, are eligible for awards ranging from 10 percent to 30 percent of the money collected by the Agency.

The SEC’s 2015 Whistleblower Report reveals several interesting trends that can help businesses improve their securities compliance strategies. Below is a brief summary:

Scrutiny of confidentiality provisions: The Office of the Whistleblower continues to focus on whether employers’ use of confidentiality, severance, and other kinds of agreements interferes with an employee’s ability to report potential wrongdoing to the SEC. For the first time, the agency brought charges under Rule 21F-17(a) against a company for including language in confidentiality agreements that was deemed to impede whistleblowers from reporting to the SEC. Rule 21F-17(a) provides that “[n]o person may take any action to impede an individual from communicating directly with the Commission staff about a possible securities law violation, including enforcing, or threatening to enforce, a confidentiality agreement…with respect to such communications.” This issue will continue to develop, and similar actions are expected in the future.