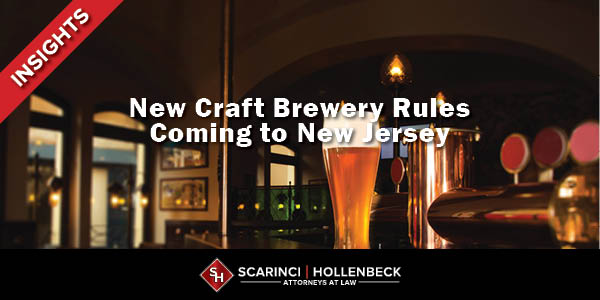 On May 28, 2019, New Jersey’s Division of Alcoholic Beverage Control issued a Special Ruling that defines the privileges of limited or “craft” brewery licenses in the State. In an attempt to balance the interests of the craft brewing industry and traditional bars and restaurants, the latest ruling relaxes some of the restrictions set forth in the short-lived Special Ruling issued last September, while leaving others in place.

“We spent months meeting with stakeholders and listening to their concerns, especially the very few, very vocal licensees who felt their views were not adequately represented in the extensive stakeholder discussions we held prior to drafting and issuing the first Special Ruling,” James B. Graziano, Acting Director of the Division of Alcoholic Beverage Control, said in a press statement. “The Special Ruling issued today includes important changes that address key issues raised in these recent discussions. The changes made are intended to help craft breweries promote their products and build their business while continuing to balance the concerns of other licensees and ensuring compliance with state law.”

As discussed in greater detail in prior articles, a 2012 law seeking to foster the New Jersey craft brew industry established limited brewery licenses, which authorize microbreweries to produce up to 10,000 barrels of beer per year. They can also sell beer as part of a brewery tour and sell limited amounts for customers to take home.

On September 21, 2018, the ABC issued a Special Ruling seeking to clarify the rules for craft breweries, particularly with regard to consumption on premises. However, widespread criticism from the New Jersey craft brewing industry prompted ABC to announce one week later that it would suspend the Special Ruling to further consult with stakeholders and lawmakers.

The ABC’s latest Special Ruling addresses concerns raised by stakeholders, while still placing new restrictions on craft breweries. In support, the ABC noted in its press release that the “Legislature never intended the limited licenses to give craft breweries the same privileges of a consumption venue, such as a sports bar or restaurant.” It added: “In recent years, however, a growing number of craft breweries began serving alcohol well beyond what the limited licenses allowed or ever envisioned. This resulted in complaints of unfair competition from bars and restaurant owners who hold licenses allowing full retail privileges.”

Under the new Special Ruling, craft breweries are still subject to a 25-per-year limit on “special events” that can be held on their premises, which was originally proposed in the previous Special Ruling. However, the term “special events” is defined more narrowly to include only those that are promoted through the media or that provide entertainment in the form of live championship sporting event broadcasts, live amplified music or DJ performances. Accordingly, trivia nights, craft making, animal adoption events, yoga, or other similar types of events will not be counted as “special events,” unless they are advertised or promoted in the media.

Below are several other key changes:

According to the Division, the statutory requirements of New Jersey Liquor Laws limiting sales of any product for on-premises consumption to only those individuals who have toured the brewery and prohibiting the Limited Brewery from operating a restaurant and selling food (other than de minimis types of food) will be enforced immediately. The Division further advised that “the remaining provisions set out in the Special Ruling should be considered guidelines and will not be strictly enforced by the Division at this time, barring flagrant or repeated violations.”

However, the Division plans to conduct a formal notice and comment period and will propose that the remaining guidelines set forth in the Special Ruling be adopted as regulations. Upon adoption, the guidelines will be fully enforceable with respect to all Limited Brewery licensees. In the meantime, the Division intends to treat the guidelines contained in the Special Ruling as special conditions on each Limited Brewery licensee, beginning with the 2020-2021 license term.

If you have any questions or if you would like to discuss the matter further, please contact me, John J.D. Burke, Esq., or the Scarinci Hollenbeck attorney with whom you work, at 201-806-3364.

John Burke, Esq. focuses his practice on the firm's litigation practice. He has experience handling complex commercial litigation matters in the State and Federal courts.Full Biography >>