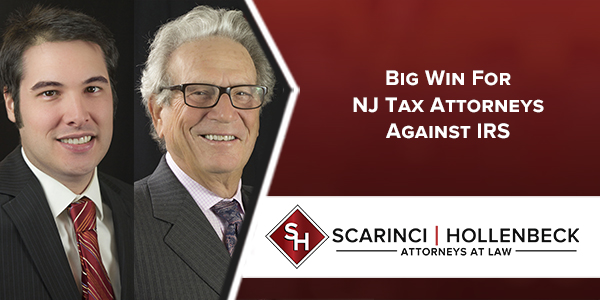 In Mehrdad Rafizadeh v. Commissioner, the U.S. Tax Court granted summary judgment for the taxpayer, holding the Internal Revenue Service’s (IRS) deficiency notice was untimely. The court specifically held that the IRS could not rely on the six-year statute of limitations set forth in Internal Revenue Code Section 6501(e)(1)(A)(ii) to assess additional tax for taxpayers who failed to file their Forms TDF 90-22.1 prior to year 2011 (when the IRS enacted the 6038D filing requirements). Scarinci Hollenbeck’s Harvey Poe and Jeff Pittard successfully represented the taxpayer.

The IRS must typically assess tax within three years of the date a tax return was due, without extensions, or the date the return was actually filed, whichever is later, subject to certain exceptions. One such exception, I.R.C. sec. 6501(e)(1)(A)(ii), enacted on March 18, 2010, provides a six-year period of limitations if the taxpayer omits from gross income amounts attributable to one or more assets with respect to which information is required to be reported under I.R.C. sec. 6038D.

Mehrdad Rafizdeh timely filed his Federal income tax returns for 2006, 2007, 2008, and 2009 but did not report income earned on a foreign account he held. The IRS served a John Doe summons seeking information relating to Rafizdeh’s account among others. On December 8, 2014, the IRS issued a notice of deficiency determining deficiencies and accuracy-related penalties on underpayments for 2006, 2007, 2008, and 2009.

Rafizdeh petitioned the Tax Court for review of the IRS’s notice of deficiency determining deficiencies and accuracy-related penalties for 2006, 2007, 2008, and 2009. After both sides conceded certain facts, the key question before the Tax Court was whether section 6501(e)(1)(A)(ii) can apply for tax years for which the reporting requirement of section 6038D did not apply.

In reaching its decision in Mehrdad Rafizadeh v. Commissioner, the court looked to the language of the statute. It ultimately concluded that “the wording of the effective date for section 6501(e)(1)(A)(ii) limits its application to years for which the reporting requirement of section 6038D also is effective.” As the Tax Court explained:

While the effective date of section 6038D was not imported by the cross-reference to section 6038D, we conclude that the most natural reading of this phrase is that the six-year statute of limitations applies only when there is a section 6038D reporting requirement (or would be barring an exception that is to be disregarded). Section 6501(e)(1)(A)(ii) does not simply incorporate the definition of assets in section 6038D; it also specifies that the assets are subject to the reporting requirement (or would be but for an exception that is disregarded). We agree with petitioner that had Congress intended simply to incorporate the definition in section 6038D of the assets to be covered, Congress could have used other more straightforward wording, such as the defined term itself.

In its decision, the court rejected that IRS’s argument that the incorporation of the reporting requirement into section 6501(c)(8) showed that Congress did not intend to make the separate six-year statute of limitations in section 6501(e)(1)(A)(ii) dependent on a taxpayer’s failure to satisfy section 6038D. It wrote:

The trigger in section 6501(c)(8) is the failure to report, and that failure results in a different limitations period. By contrast the trigger for the six-year limitations period in section 6501(e)(1)(A)(ii) is the omission of gross income from assets that are subject to the section 6038D reporting requirement (or would be but for an exception thereto), and it extends the period to six years. Thus, the contrast between the wording in the two provisions does not tell us any more about how to read the latter than the words of the statute.

If you have any questions or if you would like to discuss the matter further, please contact me, Frank Brunetti, at 201-806-3364.