Dan is Chair of the Firm’s Cannabis Law group, which is comprised of more than a dozen attorneys from each of our practice areas.  Dan represents entities seeking to obtain medical and adult-use cannabis licenses, and he has a thorough knowledge of current Federal and state medical and adult-use cannabis law and proposed legislation.  Dan regularly authors articles and presents at business events regarding the emerging cannabis industry, and he is a member of the New Jersey CannaBusiness Association and an Editor of the Cannabis Law Journal.  Most recently, Dan was selected by the National Law Journal as a 2018 Cannabis Law Trailblazer.

*“the Rising Stars list is issued by Thomson Reuters. A description of the selection methodology can be found at http://www.superlawyers.com/about/selection_process.html. 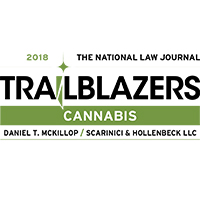