By way of background, the Plaintiff was injured after falling from a horse owned by the Defendant. Plaintiff alleged that she suffered spinal and traumatic brain injuries resulting in cognitive defects, memory loss, difficulties with written and oral communication, and social isolation. In support of her allegations, Plaintiff referenced her own Facebook account, explaining that prior to the accident she often posted photographs depicting her active lifestyle.

The Plaintiff alleged, inter alia, that because of the injuries she suffered from the fall, she had difficulty using a computer and composing coherent messages. As a result of the Plaintiff’s reliance on her social media content, the Defendant sought unlimited access to Plaintiff’s Facebook account—both private and public content thereon.

The Plaintiff subsequently appealed the Supreme Court’s holding. The Appellate Division modified the holding, “by limiting disclosure to photographs posted on Facebook that [P]laintiff intended to introduce at trial.” Opinion at 4. In other words, the Appellate Division established an unprecedented rule “allowing the account holder [of a social media platform] to unilaterally obstruct disclosure merely by manipulating ‘privacy’ settings or curating the materials on the public portion of the account.” Opinion at 8.

Yet again, the Plaintiff appealed, challenging the Appellate Division’s holding. Ultimately, the Court of Appeals held that “the Appellate Division erred in employing a heightened threshold for production of social media records that depends on what the account holder has chosen to share on the public portion of the account.” Opinion at 7.

In sum, the Court of Appeals stated that New York’s “well-established rules” of discovery should remain unmanipulated as “there is no need for a specialized or heightened factual predicate” with respect to social media. Opinion at 10.

Even though the Court of Appeals stated that “there is nothing so novel about Facebook materials that preclude application of New York’s long-standing disclosure rules,” Opinion at 7. discovery demands encompassing social media continue to pose more questions than answers.

In fact, the Court of Appeals’ holding is fairly narrow and leaves a plethora of issues unaddressed. For example:

As the courts continue to grapple with social media and its nuances, practitioners should keep the following in mind:

Jessica and Caitlin are well-versed in navigating the dynamic social media landscape with respect to both public and private clients.

They are in the process of curating a CLE which will address: (1) how to handle social media during the discovery process; (2) tips and tricks for finding, and reviewing social media accounts; and (3) the interplay between the attorney ethics guidelines and social media.

As an extension of their practice, both Jessica and Caitlin are currently pursuing their CIPP/US (Certified Information Privacy Professional) Certification to further assist clients in achieving compliance with U.S. privacy laws and regulations. 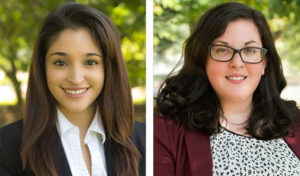 Jessica F. Gonzalez (left) & Caitlin P. Dettmer (right) both work with private and public sector clients on both state and federal labor and employment issues. They also have experience handling intellectual property matters, including but not limited to trademark registration and infringement issues.

Caitlin P. Dettmer works with private and public sector clients on both state and federal labor and employment issues. She also has experience handling intellectual property matters, including trademark registration and infringement issues.

This attorney is no longer affiliated with the firm or their profile is no longer available. We encourage you to please visit Scarinci Hollenbeck's Attorneys Page to find the right attorney for your legal needs. If you still would like to speak to an attorney about your question pertaining to this post, please call 201-806-3364.

Get the latest from our attorneys!